The idea of starting our own record label is finally becoming more of an actuality. Hopefully things go well for us.

Butcher Boy recorded a 6 song record in my living room over the course of one afternoon back in mid-February. It’s being mixed right now and should be available sooner or later. We’re all pretty stoked about this, as so far it is sounding pretty damn good.

This Tuesday, (March 2), Red Medicine will be playing a set with some new material at The Landing at the UMF Campus, 5:00 ish. The show is part of a class at UMF, called The Café Project, and there will be coffee and some other performances.

This Friday, (March 5), Pamola and Butcher Boy will be playing Eyes Like Fire‘s last show (great friends of ours, who, as a band, will be missed very much). It’s going to be a really fun evening, featuring Captain Hollow, a great new band from Bangor, ME, and The If in Life. The show is at Hastings Lounge on the USM Campus in Gorham, ME. It starts at 7:00 pm sharp. 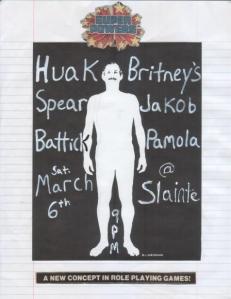 The next night, at 9:00 pm at Slainte in Portland, Pamola will be playing with Huak (original, catchy, groovy post-punk), Britney’s Spear (from Western Mass), and Jakob Battick and Friends (Jonathan plays with these guys, who create slow, melodic music full of passion). We’re all really excited for this show and the one the night before. It’s going to be a fun, good weekend to spend in Portland.

For booking at Poland Street in Portland, please e-mail 26polandshows@gmail.com.